H is for Harmonica Masterclass with David Barrett [#386] 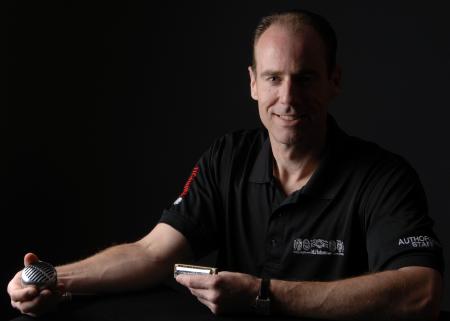 Episode 386, 12 June 2013
I interview David Barrett, one of my favorite harmonica teacher/performers in this ABCs of the Blues episode. A Grammy nominated blues harmonica player (for his work on John Lee Hooker Jr.’s album All Odds Against Me), this California Bay Area resident is also President of Harmonica Masterclass Company (harmonicamasterclass.com), Founder / Director of School Of The Blues (schooloftheblues.com), author of many instructional publications and CDs and band member and performer. He also has the website blueshramonica.com

I've listed the questions I put to David along with the music you'll hear mixed into the interview. Please check back to thebluesroom.blogspot.com for part two of this interview. Enjoy!

Question: Hi David, can you please introduce yourself and tell us just who ‘David Barrett’ is and where you’re from and tell about the first piece of music which really affected you?
1. David Barrett - Lick Train
2. Joe Seneca feat. Frank Frost & John Juke Logan on harmonicas - Willie Brown Blues (Crossroads soundtrack)

Q: Can you please tell us how your musical career began and how blues harmonica became a part of your life? You might like to share how certain individuals influenced you musically. I understand legend Gary Smith took you under his wing early on!! When I tell people I play blues harp they either mention Sonny Terry or Little Walter, some will even say, ‘oh cool, I love Bob Dylan!’ Tell us what style blues do you play on harmonica?
3. Mark Hummel introduces Gary Smith / Gary Smith - She's So Fine
4. Marion Jacobs aka Little Walter - Juke

Q: Can you briefly describe some of the other styles in context to yours so listeners can get an idea of the distinct differences, e.g. Country vs Chicago.
5. Memphis Jug Band - Cocaine Habit Blues
6. John Lee Williamson aka Sonny Boy Williamson 1 - Good Morning Little School Girl

‘On This Day In Blues History’ by PW Fenton.

Q: David you’re involved in many projects and have been from an early age. I’m not even sure where to begin or which to ask you about first, but would you mind telling us a bit about each of them? Please feel free to talk about any other projects or roles you have going on and in any order. To begin this section, listeners will hear David playing a song called, ‘Big Boys Jam’. Its from David’s instructional book and CD called ‘Building Harmonica Technique’ which is out on Mel Bay.
12. David Barrett - Big Boys Jam
13. David Barrett - Serious Fun
14. David Barrett - Chicago Style

Download link for this episode: 386
Posted by Nate Ness Monster at 5:51 pm

Great episode Nate........Bluesharmonica.com is an exemplar of excellence not only on harmonica but on the future of teaching via the internet...... elegantly awesome!
BTW who is playing the intro @ 00.22?
Cheers Julian