Why am I posting about Blood Sweat and Tears on a Blues blog? Well it's becasue the harmonica player who is touring with BS&T is one of the best blues harmonica players around - Rob Paparozzi.

I have enjoyed Rob's blues music, but not only does he do blues. Go check out his website for a long list of who he has performed with and you'll see why he is an expert in his field.

Rob sent me an mp3 of his song Hoy Hoy Hoy and so I played it on my show dated 22-10-08. Here's a link to a podcast of it if you didn't catch my show LIVE: http://huffa_puffa.podomatic.com/ 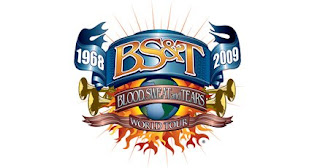 Blood, Sweat and Tears will perform live in New Zealand in February 2009 as a part of their 40th Anniversary World Tour.

One of the greatest horn bands in the history of popular music, Blood Sweat & Tears’ alumni roster reads like a Who’s Who of the world’s greatest musicians.

Blood Sweat & Tears provides a night you will never forget, whether playing their greatest hits, or new arrangements of classic songs including: ‘You've Made Me So Very Happy’, ‘I Can't Quit Her’, ‘Go Down Gamblin’, ’Hi-De-Ho’, ‘Sometimes In Winter’, 'And When I Die', 'I Love You More Than You'll Ever Know’ and more.

2008 brought the bands first World Tour in many years and the return of Founding Father Steve Katz, who will be performing during the NZ tour.

‘Not only the first, but the greatest jazz/rock fusion band of all time’
(Melody Maker).

Blood, Sweat and Tears will perform live in New Zealand in February 2009 as a part of their 40th Anniversary World Tour.

Posted by Nate Ness Monster at 8:31 pm No comments: