Who's is this and who is that?

Hasn't photography improved over the years! This picture is a ideal example of how great moments in blues history can be captured for future generations to behold.
Have you seen this picture before? Who's hand is it?

OK, and while you'll finding out who's hand that is,
tell me the name of the handsome man below. 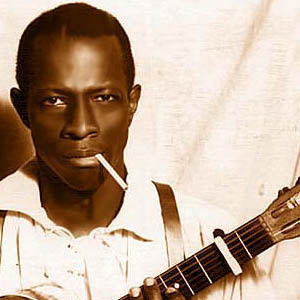 BB King, Guitars and the Pope 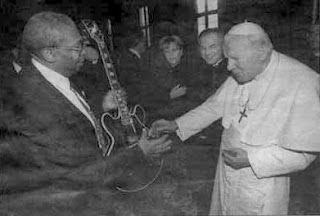 BB King was asked, "A while back you gave one of your guitars to the Pope. What was it like meeting him?"

To which he replied: "I really enjoyed him, he's a remarkable gentleman. I tell you what, I guess I felt as close to God as I ever had ... it just seemed like you could feel God's presence around him."

The question I'll be asking if I ever got to meet the Pope is, "So what did you do with that guitar that BB King gave you?"

Leave a comment here with your suggestions of what you think the Pope would have done with the guitar BB King gave to him.
Posted by Nate Ness Monster at 10:34 am No comments:

Held in the popular seaside holiday resort of Whangamata, the 5 day festival celebrates the music, kulture, fashion, music, hot rods, motorbikes, dancing, dragsters, scooters of this golden era.The festival has grown from 4,000 to over 70,000 people in just 5 years. This makes it one of the largest events of its kind in the world. All proceeds raised are donated to emergency services in the area. Come along and enjoy all the non stop action!
http://www.beachhop.co.nz/home/
Watch the Beach Hop Promo!

Posted by Nate Ness Monster at 2:12 pm No comments:

"A must see festival"
Leading up to Bluesfest 2007 I really had no idea what I was in for. Now after attending my first Bluesfest all I can say is that Bluesfest has to be experienced to be fully appreciated. I've not been to a fest as big as this one so I don't have too much to compare it with. Having said that I do know that there's nothing (around now) in New Zealand that would compare to Bluesfest. Sweetwaters music festivals would have close close but not even the current 'Big Day OUT' would come close!

Let me set one thing straight though, its not a Bluesfest for purists only, not by any means. Thats why its called the East Coast Blues and Roots Festival, east coast of Australia that is! Right smack in beautiful Byron Bay. From the line ups you can see that theres way more to Bluesfest than just Blues music. Oh don't get me wrong, theres a good dose of Blues music at Bluesfest but the other non-blues bands are of equal quality and fame.

Five days of non-stop music performed by International and National artists. You can't ask for anything better than that.

My camera wasn't the best so I didn't take too many pics but I have since found an excellent website where awesome photos have been placed by Tao, a professional photographer, of Bluesfest 2007.

Click image above ~ go to photos taken by photographer Tao Jones of the 2007 18th East Coast Bluesfest, Byron Bay Australia ~ Contact taoart@gmail.com for information regarding prints of artists. See more photos by Tao of previous Bluesfests at www.byronbayphotographer.com
My Bluesfest LIKES
It's a safe and friendly atmosphere: no gangs, no fights (that I saw or heard of!)
A variety of ethnic foods available
Water stations through out venue
Very reasonable entry cost
Excellent night lighting
A fun festive feel A
wide range of music
Interesting stalls including merc stall
Well organized, playing times posted on website and handed out on arrival
Within walking distance from Byron Bay center
Buses running to and from fest
Childcare facilities
My Bluesfest DISLIKES
A little too crowded at times
Some mud patches due to rain throught-out fest
Costs of food a tad high, same goes for drinks

As you can see from my lists theres more to like about Bluesfest than dislike. I'm returning for bluesfest 2008, can't wait. This time I'll go a little more prepared. I'll take better footwear - more waterproof and comfortable. I may even take a fold away chair as the days are long from 12 noon to midnight each day for five days. I'll pack some snacks to much on to cut down on food costs and I take a waterproof jacket. other than those minor things I'll take BIG FUN attitude and make the most of it. 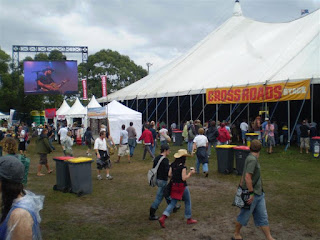 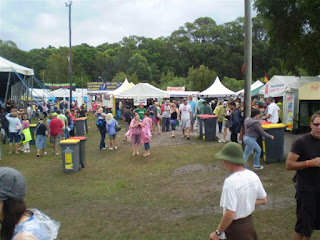 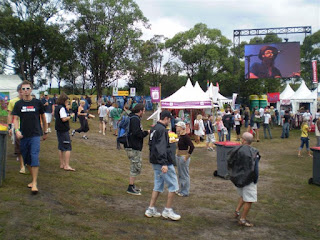 3 Day time shots of what surrounded entrances to the Crossroads tent.
By the end of the fest the grassy places were muddy places.
A big screen of whats on in the tent, and stalls of merc.
Plenty of bins and what!, no litter
(you should see inside the tent after each gig! A different story.) 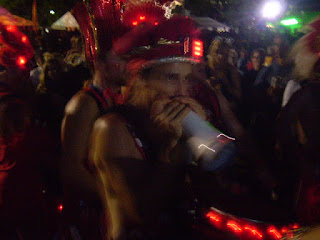 A true festive feel at night Taken looking down at Jambalaya and Mojo Stages.
Out of photo is merc stall to left and food stalls to right. 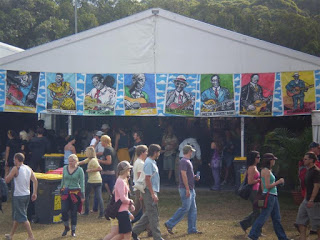 A bar for alcohol ...
Jambalaya stage to left and MOJO stage to right 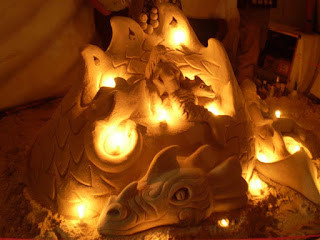 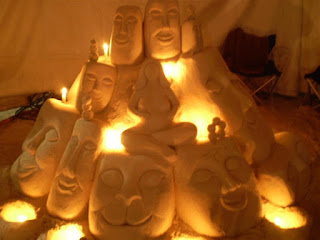 Each day an artist created a new sand sculpture 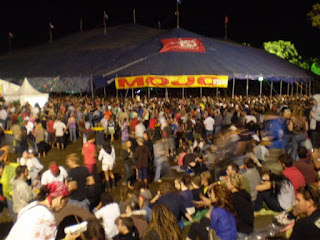 The biggest stage was in the Mojo tent, here ben Harper,
Wolfmother, Xavier Rudd and The Roots played 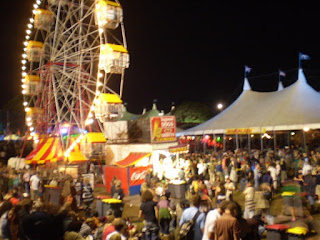 The nights get a little carzy at Bluesfest, yeah baby! 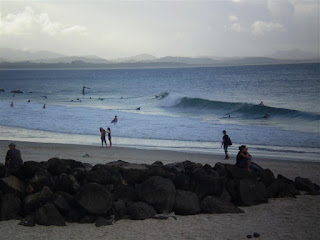 Yes I got time to surf and be a tourist, this shot is of the Wreck,
an old ship wreck, but nice surf 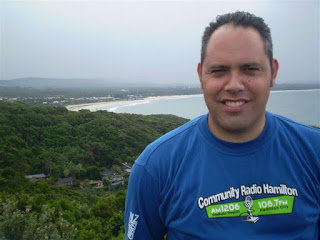 From the lighthouse with Byron Bay in the background 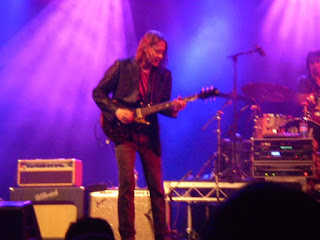 Robben Ford was amazing, he joined forces with Larry Carlton 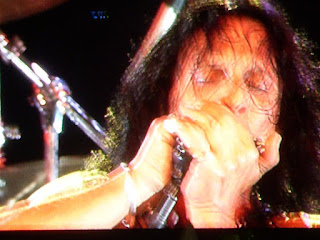 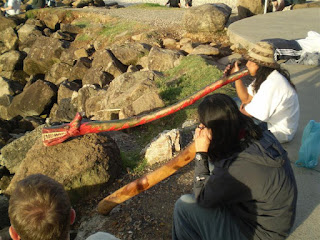 A common sight around Byron Bay 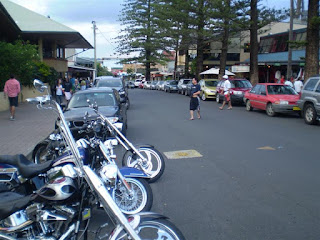 Looking up the main at Byron Bay 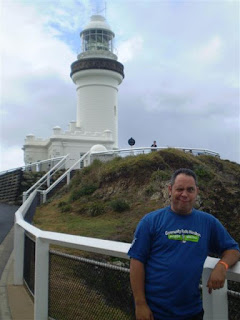 It's PopEye at the lighthouse 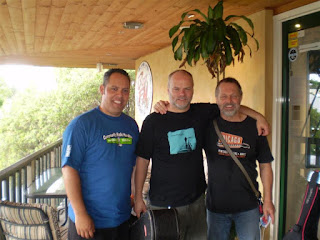 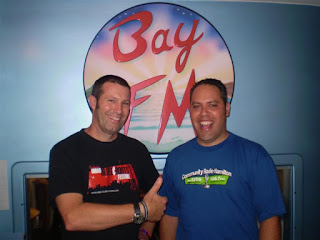 Anthony Moulay of Bay FM was very good to me even
though he was flat out with guests and stuff. He hosts the blues show on Saturdays called Red Hot and Blue with Ken “Nothin’ but the Blues” Hughes who is pictured below doing his thang! 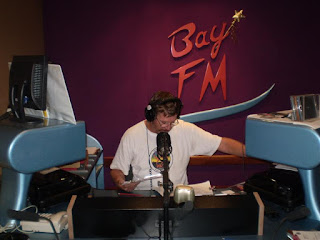 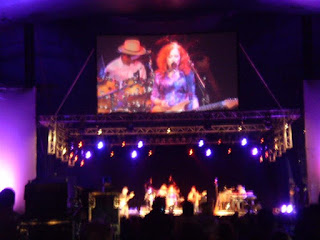 Bonnie Raitt - WOW what a Woman! 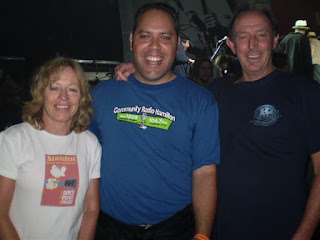 And finally, I got to meet up with JohnnyMac and his partner.
I met JohnnyMac on the bluesfest message board.
Taken just after seeing BlueShaddy in the APRA tent

Although the bluesfest was way cool I must say that staying with and catching up with my cousin, Joselle and her two beautiful children, Manawai and Maia was the biggest highlight of my Byron Bay experience. My stay in Byron Bay attending Bluesfest 2007 would not have been as good as it was if it had not been for my cousin's aroha and hospitality. And believe it or not I didn't even get a photo of us together cuzz! Next time for sure!!

And lastly but not least by any means,
BIG UPS to Gaynor and Peter for making it
possible for me to attend Bluesfest 2007.
Roll on Bluesfest 2008!