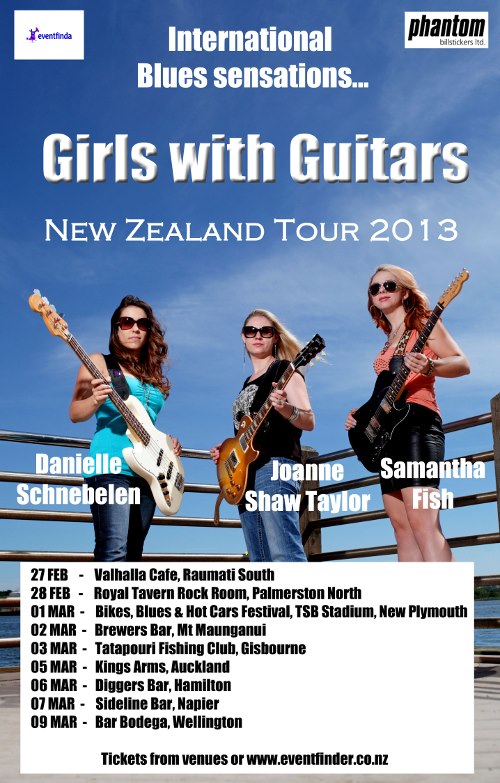 In this episode I interview Thomas Ruf of Ruf Records and Danielle Schnebelen of Girls With Guitars. They are in New Zealand for the first time touring North Island venues. Thanks to Simon of Yellow Eye Music for linking me with these great people. And to Danielle, I am so sorry for pronouncing your surname so wrongly each time!!!! Heres some details about Girls With Guitars:

During the past two years, the popular "Girls with Guitars" tour presented by German Blues label Ruf Records has opened the eyes and turned the heads of music fans all over North America and Europe.

Now it's time for these talented women to bring their high-powered act to the Southern hemisphere.

In 2013 the dynamic trio of Samantha Fish, Danielle Schnebelen and Joanne Shaw Taylor will perform in New Zealand for the first time ever.

Samantha Fish is a Kansas City native, and has anchored the live show since 2011. Her performances have surpassed all the pre-tour hype surrounding this rising star of the blues, whose debut album Runaway triumphed in the Best New Artist Debut category at the 2012 Blues Music Awards in Memphis. Just 23 years old, Fish sings and plays with astounding maturity. She made that clear on Runaway, a convincing blend of blues, boogie, rock and country released in 2011.

Danielle Schnebelen has a voice to raise the hairs on the back of your neck, this left-handed bass player (one-third of Trampled Under Foot – winners of the International Blues Challenge in 2008) is along with Samantha Fish, part of Kansas City's thriving blues scene. Schnebelen received a nomination as Best Bassist at last year's BMAs and has already shared the stage with such luminaries as Koko Taylor, Kenny Wayne Shepherd and the Tedeschi-Trucks Band.

Joanne Shaw Taylor is a hard-edged British blues guitar player extraordinaire, debuted on the international scene in 2009 and has released three critically acclaimed CDs. She now resides in Texas and it was there that she perfected her brand of spirited, hard rocking blues on the recently released Almost Always Never. "I started playing little clubs in the UK when I was 14 or 15. But the sound of this album is a better representation of what I always wanted to be as an artist," says Taylor, who recently played lead guitar for Annie Lennox at the Diamond Jubilee Concert for Queen Elizabeth II. The album, her third for Ruf, has solidified her standing as the shooting star of modern blues. 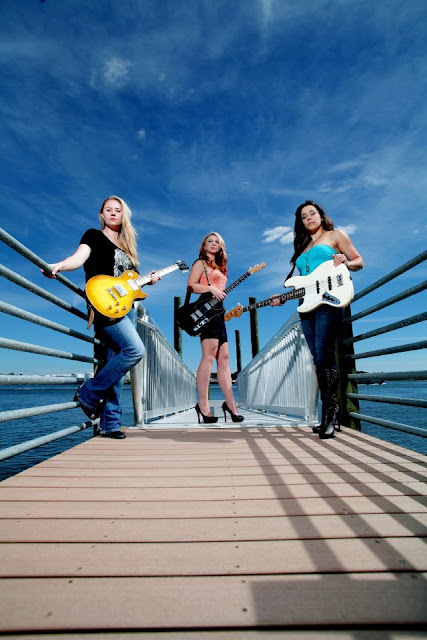 Posted by Nate Ness Monster at 5:51 pm No comments:

Get ready to ROCK! We have a Deep Purple / Journey special for you here with loads of interview material with members of Deep Purple and Journey plus some of the best songs by DP and J (see playlist below). We giveaway a double pass for the Deep Purple / Journey event in Auckland on Sunday 24 Feb at Vector Arena. Thanks to Nancy Blacker of Blackout Music Management for the promo tickets and the audio for this episode. ROCK ON!!

Download link for this episode: 370
Posted by Nate Ness Monster at 5:26 pm No comments:

In last week's episode I mentioned how I'd like to present some shows that covered the ABCs of the blues. Well, during the week I went back to listen to artists who started with the letter A and because I found some great blues in my collection I decided to s-s-l-l-o-o-w-w things right down. I'm taking it back to the letter A in this episode. Theres just too much good blues to quickly gloss over it. I won't be presenting the definitive ABCs of must-listen to blues but I will be presenting the ABCs of blues that moves me.

And keep those texts, emails and facebook messages coming with your entries to win the Deep Purple and Journey tickets.

Download link for this episode: 369
Posted by Nate Ness Monster at 5:41 pm No comments: 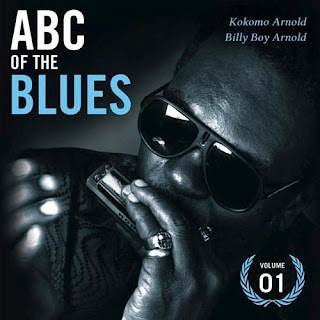 Its about time I dug deep into my blues collection and pulled out an alphabet of blues. No theme really, just a lot of fun going through the ABCs of blues greats and some not so well known greats. Oh yeah and have you heard, I HAVE A DOUBLE PASS FOR DEEP PURPLE AND JOURNEY to give away on my show so listen up over the next few weeks!!!!!!!

Download link for this episode: 368
Posted by Nate Ness Monster at 11:57 am No comments: 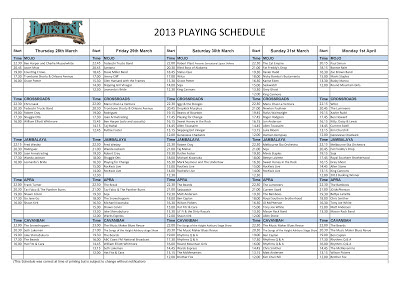 Here tis! What a great lineup yet again!
http://www.bluesfest.com.au/﻿
Posted by Nate Ness Monster at 12:45 am No comments:

WIN Tickets To Deep Purple and Journey In Auckland: 24 Feb 2013

Stay tuned to The Blues Room on Weds 13th and 20th Feb for your chance to win a double pass to this great night of ROCK!!!

Deep Purple has sold over 100 million albums worldwide with iconic hits including "Black Night", "Highway Star", "Space Truckin’","Hush", "My Woman From Tokyo", "Perfect Strangers" , "Knocking At Your Backdoor" and "Smoke on the Water", arguably the song best known by generations of music lovers worldwide, which celebrates its 40th anniversary this year.

Ian Gillan, Roger Glover, Ian Paice, Steve Morse and Don Airey continue to travel the scope of hard rock — the textures and nuances of recent works are anything but thudding retreads. If you set a random play setting for the band’s entire catalogue, the result is one of the finest musical outputs to grace rock music.

Having amassed so many songs that get coined under the “classic” moniker, set lists have been a never-ending debate among diehards and newer fans. But Deep Purple has been more than in synch with fans’ tastes to remain a powerful drawing force since their formation in 1968.

Nominated for the 2013 Rock and Roll Hall of Fame, Deep Purple are currently preparing to unleash their latest album of brand new material in February, 2013.

Ian Gillan notes:“What a fabulous tour. I’m really looking forward to this and want to be in the crowd! Deep Purple AND Journey? Amazing!”

Joining Deep Purple on the road for their first tour of Australia and New Zealand is legendary San Franciscan rock outfit, Journey.

Journey is one of the most popular American rock bands of all time, creating some of the best-known songs in modern music including "Don’t Stop Believin’", "Anyway You Want It", "Faithfully", "Who’s Cryin’ Now" and "Open Arms". Since the group's formation in 1973, the band has earned 19 Top 40 singles and 25 Gold and Platinum albums in the US with their Greatest Hits album going 15 times Platinum.

Journey's 2011 Eclipse World Tour was one of the band’s most successful tours ever, drawing nearly a million fans and ranked in the Top 15 Tours of the year. In honour of their significant and lasting contributions to live music and the touring business, and in acknowledgement of their commitment to the fans and the art of performing live, band members Neal Schon, Jonathan Cain, Ross Valory, Deen Castronovo and Arnel Pineda were awarded the prestigious “Legend Of Live Award” at the 2011 Billboard Touring Awards.

"Things are opening up everywhere we go," says Neal Schon. "Journey is a world band now".

Chugg Entertainment’s Executive Chairman, Michael Chugg, said "To have two of the world's greatest ever rock bands on stage together is something we're so proud to be involved with. These shows are going to tear the house down!"
Posted by Nate Ness Monster at 12:36 am No comments: 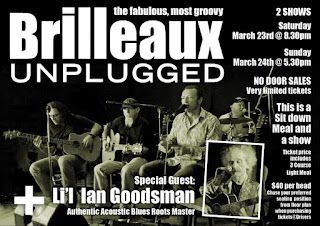 Posted by Nate Ness Monster at 12:29 am No comments: