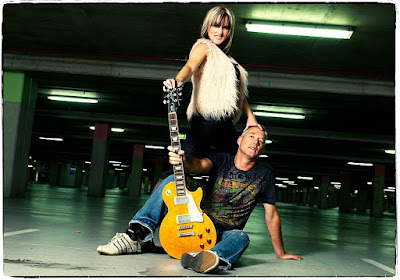 
“Singing songs about holding hands with a devil means you two will be going to hell!! And I’m not joking...its just disgusting … Hell !!” Reverend John Revelator

She is wicked, outrageous, alluring, with the voice of a bad tempered Angel.

He will engage you with his rock star demeanour, demanding your attention, singing like a demon, with a voice soaked in a barrel of whiskey.

KNiKi and Mike Beale deliver a powerful blues rock performance, often described as a combination of Janis Joplin and Eric Clapton, with music ranging from intimate acoustic moments to the full on energy of a 5 piece band.

Infused with Mike Beale’s fluid yet dynamic guitar playing and a voice that’s delivered with explosive roars and intimate whispers.

Candy to your ears and bubbles in your mouth.

I missed interviewing Mike recently when he and Kniki were touring NZ. Maybe next time. Heres a few of their rockin blues for you to enjoy. More details about Mike and Kniki are found at http://www.knikiandmike.com/

Posted by Nate Ness Monster at 4:53 pm No comments: 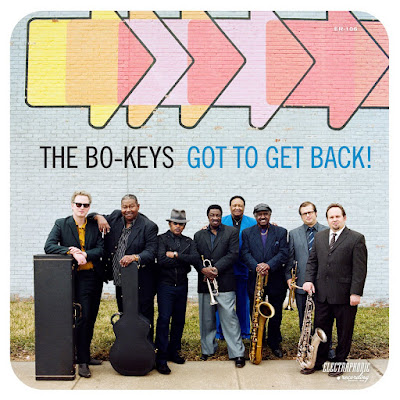 The Bo-Keys don’t replay the Memphis instrumental tradition. They deliver a hard-hitting and authentic take on the city’s original soul sound. A devotee of Stax instrumental groups like the Mar-Keys and Booker T. & the MG’s, bandleader and bassist Scott Bomar formed the Bo-Keys as homage to the quintessential Memphis sound, yet he clearly has both feet firmly planted in the twenty-first century. The Bo-Keys’ latest recording, Got To Get Back, features several special guests, including Charlie Musselwhite, Otis Clay, and William Bell, just to name a few.

Mini-Documentary About The Making Of: Got To Get Back

Robert Putignano for BluesWax: How are you doing Scott?

BW: The latest Bo-Keys disc is on a new label for you?

SB: Yes, our first album came out on Yellow Dog records around 2004-2005. Since that time I started a studio named Electraphonic. That studio grew into a recording label. The Bo-Keys’ Got To Get Back is the fourth release. I did two for a soul-jazz group named The City Champs, and one single for the Bo-Keys.

BW: Good luck with all of this. You know this isn’t an easy game these days.

SB: It’s hard, but I believe that if you make good music, people will buy it.

BW: Kind of like that baseball movie, build it and they will come. Scott, please give us a little history about your achievements.

SB: I grew up here in Memphis, lived here my entire life, always loved the Memphis sound and Memphis music. I forget the first times I heard Al Green, Booker T. & the MG’s, the Bar-Kays, and other Memphis bands, and when I heard Otis Redding on the radio, he had a huge impact on me. When I got older and played with more and more musicians, I got to work in the studios in Memphis and got to know those guys that were involved with those classic recordings from Stax and Hi Records. Eventually, I got work with them and backed up William Bell, Eddie Floyd, and Carla and Rufus Thomas. As I got to play with all these great artists, I just soaked it all up.

BW: How old are you Scott?

BW: Wow! So this music preceded you by several decades. Plus, what’s more impressive, is how you are able to turn it back out in truly fine fashion, yet modernizing the music to sound contemporary.

SB: Thanks, but that sound never really went away, especially here in Memphis. Besides you can go around the world and still hear Al Green and Otis Redding on the radio. I just decided to study the roots of Memphis music. That eventually lead to putting together this current album, plus having several of the originators join the Bo-Keys and perform on the album was a real thrill for me.

BW: I had the pleasure of getting to talk with Booker T. a few weeks ago and mentioned the Bo-Keys name, and he said these guys get it.

SB: Wow; that means a lot to me, especially coming from Booker.

BW: You’ve got that right. He also has a lot of respect and wants to continue to preserve and expand that Memphis sound. So how did this particular Bo-Keys project get underway?

SB: It all started when I had a group in the mid 1990s called Impala. We were an all-instrumental band. We did kind of soundtrack recordings that sounded like Booker T.- surf-type music.

SB: Yeah, we also mixed in some Freddie King sounds, like those early instrumental albums he did. We tried to have that kind of sound too. We toured a lot, had a couple of albums, but we ended up breaking up. Before the breakup we headed into a more soul direction, so the Bo-Keys became born to continue the sound we were working on.

Around this same time I started working at the Stax Music Academy, which were the original Stax studios and offices. When they were building the academy they had a summer music camp where they hired a lot of the original Stax session players to teach the kids. Somehow they threw me into this mix, so that’s how I met Skip Pitts. The first day that I go there to teach the kids, I see this guy plug into a wah-wah, and the first two seconds I hear him play, I knew exactly that it was Pitts and said to myself this is the guy who played guitar on Isaac Hayes’ “Shaft.”

I had heard Pitts name for years, but never met him or heard him play live. We had a different band lineup then, but some of the band members had conflicts playing in other bands. I wanted to keep as many of the originators of the Memphis sound in my band, and that’s where we are now. So as the Bo-Keys, we’ve been doing this for about ten years.

BW: I guess this was all meant to be for you, starting with the Impala band, onto the Stax summer camp, and now the Bo-Keys.

SB: It’s been a dream come true for me, Bob, it’s also been a lot fun doing a lot of projects like Cyndi Lauper’s Memphis Blues. We were also in the film Soul Men, with three of our songs on the soundtrack for that.

BW: You either know how to work the band well for projects like this or have someone working it well for you.

SB: We’ve just been very blessed. We have some great friends, we all like to work, and we never say no to anything.

BP: How did you get Otis Clay to record with you?

SB: Through our drummer, Howard Grimes, and the songwriter Darrell Carter, who co-wrote with Bobby Womack. He also was a staff writer at Hi Records, so he wrote a lot of stuff with Willie Mitchell for Otis Clay. Darrell co-wrote “Got to Get Back” and told me that the perfect guy to sing this song was Otis Clay. So I called him, told him about the song, and he was hooked, saying this is the song for me!

Otis Clay is a very special guy, one of the nicest guys in the whole world. He’s also one of the most professional artists out there. There’s not a lot great soul singers out there anymore, but Otis is one of them. We’ve lost so many blues soul singers, and we’re fortunate to have Otis with us.

BW: And it doesn’t look like he’s going away anytime soon. He looks fabulous and sounds great, too! By the way, Otis Clay and his band sang “Got to Get Back” at the Pennsyvania Blues Fest last weekend, and they nailed it!

SB: Alright! He sounds as good if not better than he did forty years ago. When he came to record with us we nailed the song down in the second take, and we did it all live. The experience was like being vaulted back in a time machine for me as I imagined what it might have been like recording back at Stax or Hi in the ’60s. It also helped that Howard Grimes and Otis worked together so many times before, so they locked in with each-other.

BW: So now I know why you named your new disc Got to Get Back, you certainly know how to capture and enhance that classic Memphis sound. By the way, the instrumentals on the CD really worked extremely well for me, but I have to tell you that at a very young age listening to AM radio I always gravitated to instrumental music.

SB: It was a great sound to hear on the dial, and I can understand how that worked for you. Before I forget, I wanted to let your WFDU listeners and BluesWax readers know that we are going on the road and will be at Joe’s Pub in New York City on Monday October 17th.

BW: Great news, Scott, I will be there, and if you need a push before the gig, please know that you are welcome back on the air with me. I will also try get my editor to cover the gig, and maybe you can get Otis Clay to fly in?

SB: We are really looking forward to playing New York, and look forward to seeing you there.

BW: Talk to you soon, Scott, thanks for your time.

Bob Putignano at www.SoundsofBlue.com is a contributing editor to BluesWax.
http://bluesrevue.com/2011/08/blues-bytes-scott-bomar-of-the-bo-keys-8-19-11/
Posted by Nate Ness Monster at 4:30 pm No comments:

Email ThisBlogThis!Share to TwitterShare to FacebookShare to Pinterest
Labels: Interviews, The Bo Keys 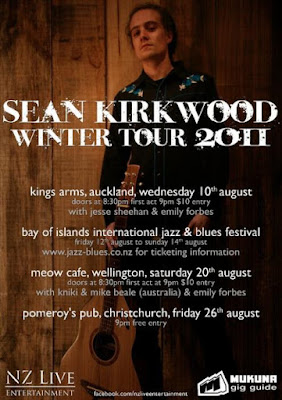 Sean Kirkwood is a solo musician well known around Wellington and the Hawkes Bay for his distinctive sound of blues and alt-country. He plays a mean lap slide guitar and is a really as well guy. Check his interview and a few tunes of his out on this episode of The Blues Room.

Posted by Nate Ness Monster at 4:49 pm No comments: 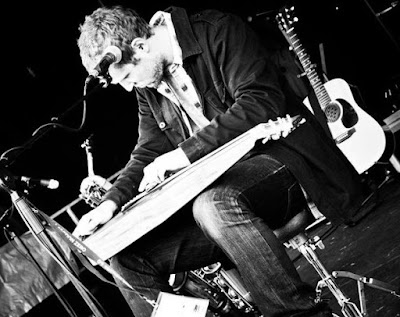 Thomas Oliver is attracting great interest from NZ audiences and I'm sure it won't be long that he'll be attracting the same interest off-shore too. He plays lap slide. And plays it very well too. His band went from a 3 piece to a 5 piece for this album and of the album Thomas says its, “more organic, earthier and rich ... and the step from 3-piece to 5-piece has completely opened up our sound, and allowed a lot more creative expression for us, and particularly for me as the writer.” Listen to several songs off the album and an interview with Thomas Oliver in this weeks episode of The Blues Room, plus new tunes from The Tedeschi Trucks Band and Micheal Powers as well as some chit chat with Hamilton Blues Society representative, Peter van Vroonhoven. Enjoy!

DOWNLOAD
Posted by Nate Ness Monster at 2:19 pm No comments: