Good friend Darcy Perry takes a few minutes out from band rehearsal to chat about what it means to be on the GrassRoots line up for 2011. PLUS I drop a new tune from Jan outta Black and Tan Records (Denmark). He's blending modern beats and blasts from the future into existing tracks for a fresh sound that makes the rhythmic heart of the blues beat stronger than ever! Enjoy. 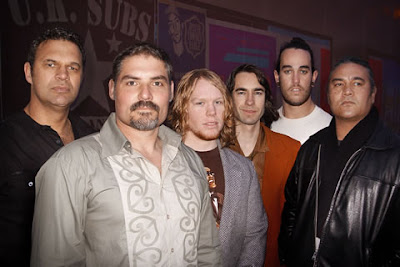 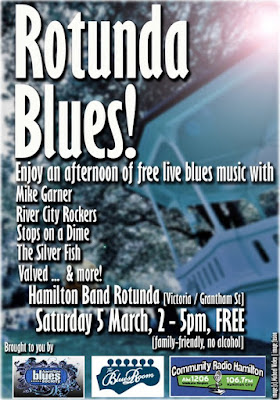 For the first time on the Hamilton Band Rotunda a collection of Hamilton blues bands PLUS the very talented Mike Garner, former President of Hamilton Blues Society, will perform 3-hours of FREE blues music.

You're invited to come along to a family friendly, alcohol free event and enjoy some live and local blues from a variety of musicans and bands.

MIKE GARNER
Mike Garner is an accomplished singer/musicain/songwriter who has lived in New Zealand from 1987, and is heavily involved in the New Zealand blues scene. Mike works solo, as a duo, trio, or full band and gigs extensively throughout New Zealand. He will perform a solo set for Rotunda Blues.

VALVED
Based around Father and Son John and Casey Messent, VALVED will be made up of a mixture of seasoned musicians and the next generation of musical talent.

HAMILTON RIVER ROCKERS
A seasoned and busy rock and blues band, many members of which are regulars at the HBS jam nights.

STOPS ON A DIME
Newly formed but bursting with talent, STOPS ON A DIME play a cruisy laid back style of blues with panache and flair.

THE SILVER FISH
HBS club President Kevin Ballinger will bring together some of his friends and fellow club members and surprise us with a collection of blues standards and classics.

Theres three main sponsors for Rotunda Blues so we'll provide three CDs as a prize package, one CD from each of us to YOU!

PS ... have you invited your facebook friends to Rotunda Blues? Go to the Rotunda Blues event page and click on Invite Selected Friends.
Posted by Nate Ness Monster at 4:00 pm No comments: 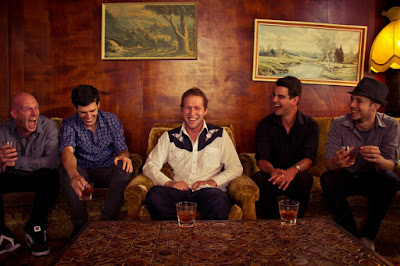 Wellington 5-piece The Thomas Oliver Band have spent the past few years touring and playing live throughout New Zealand with the likes of Fat Freddy’s Drop, Gin Wigmore and Britain’s Oli Brown. Within this time the band have also written and recorded their debut full-length album ‘Baby, I’ll Play’ to be released in early 2011.

“From the sexy, dirty blues/rock of ‘Nothing Left’ and ‘In My Bones’ to the glorious, perfect-pop balladry of ‘A Letter’, Every Penny is flawless. This is just the beginning. If you do not know who they are, watch this space: they are simply too good to stay underground for much longer.” - M2 Magazine

Initially a 3-piece, The Thomas Oliver Band grew into it’s current form following the release of ‘Every Penny’ thanks to the lifelong friendships crafted while the five boys studied at the New Zealand School of Music. It is the fresh instrumentation of the 5-piece, including lap-slide guitar, double bass and baritone saxophone, which creates The Thomas Oliver Band's distinctive sound. The new album is “more organic, earthier and rich”, says Oliver, “and the step from 3-piece to 5-piece has completely opened up our sound, and allowed a lot more creative expression for us, and particularly for me as the writer.”

The Thomas Oliver Band have created a staunch following through their live performances. It was their stage show which saw them selected by the New Zealand Campus Arts Network as the Emerging Artist of the year to complete a full national tour in 2009. They have gone on to play at some of Aotearoa's renowned festivals and joined the bill with our country's top acts. 2011 follows this trend with The Thomas Oliver Band named in some of the best summer series including Wellington's Garden Magic, Auckland's Zoo Music, and A Day on the Green with legends Joe Cocker and George Thorogood.

“It was a pleasure and an honor to share the stage with you guys. Definitely the coolest original sound I have heard in... since I don’t know when the hell when” - Oli Brown, Winner Best Male Vocalist, and Young Artist of the Year at the British Blues Awards 2010
"Thomas Oliver is what cool dude. I enjoyed interviewing him on The Blues Room and love his bluesy stuff, the band have really got a good thing going on. I wish them all the very best, nice to have young talented guys like the Thomas Oliver Band representing New Zealand." Nate Taiapa

The Blues Room 264 Ready For Some Blues

The Blues Room presents ...
READY FOR SOME BLUES
Episode 264, 9 February 2011
I'm excited about a blues event that I'm helping to organise with Hamilton Blues Society and Community Radio Hamilton. Its a free blues event at the Hamilton Band Rotunda we're calling ROTUNDA BLUES. Its not official yet but I can say that the date we have applied to use the Rotunda is the 5th March. So keep this date free and keep tuned to The Blues Room for more details. It will the first of its kind and hopefully not the last so come out and support it. Heres this week's playlist, are you ready for some blues?
1. Eli 'Paperboy' Reed and the True Loves - (Doin' the) Boom Boom
2. Ray Camacho - Lets Boogie
3. Mongo Santamaria - Feelin' Alright
4. Otis Taylor - Black's Mandolin Boogie
5. Dawn Tyler and Paul Deslauriers - Boozin'
6. Ruthie Foster - Up Above My Head (I hear music in the air)
7. The Shuffle Tones w/ Ronnie Shellist
8. The Todd Wolf Band - Ready For Love
9. The Todd Wolf Band - Crowded in my soul
10. Dani Wilde - Born To Love Him
11. Steve Baker - Worried Mind
12. Mitch Kashmar and the Pontiax - The Petroleum Blues
13. The Hollywood Blue Flames - Bad Boy Blues
14. William Clarke - Tribute to George 'Harmonica' Smith
DOWNLOAD
Posted by Nate Ness Monster at 7:08 pm No comments:

The Blues Room#263 Spotlight on HBS with Peter Van Vroonhoven 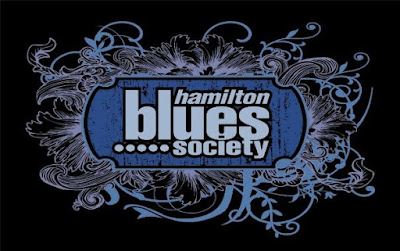 The Blues Room presents ...
Spotlight on Hamilton Blues Society
Episode 263, 2 Feb 2011
My guest is Peter Van Vroonhoven, a committee member of the Hamilton blues Society and the man behind the new website and facebook profile for HBS. He spins some tasty blues in this epsiode too, check it out. Enjoy!!
1. The Hipshooters - Come On
2. Rita Chiarelli - The Thrill Is Gone
3. Ruth Wyard - Turtle Blues
4. Lloyd Spiegel - If I Killed Ya When I Met Ya
5. BB King with Billy Gibbons - Tired of Your Jive
6. Darren Watson - Love Is An Ocean [NZ]
7. Smokeshop - So Glad [NZ]
8. Tommy Emmanuel - Tailin the Invisible Man
9. Darcy Perry - Blues is a Healer [NZ]
10. Albert Castiglia - Mojo
DOWNLOAD
Posted by Nate Ness Monster at 5:45 pm No comments: