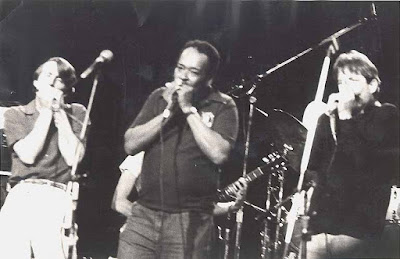 Paul Butterfield would have been 64 on 17 Dec 2006.
Above is a pic of him jamming with Norton Buffalo and James Cotton.
His music lives on and you could do everybody a favor by
putting a record or CD of his on and turning it up.

Posted by Nate Ness Monster at 4:57 pm No comments:

Well for only two weeks of organising I say we pulled off a fairly OK blues jam - thats right in just two weeks!

I had great support from John Bissett, Bryon Steenson and Bill Uruamo of the Hamilton Blues Society - they allowed us to use the PA gear. I approached the owner of Biddy Mulligans, Gordon, who was only too happy for us to jam there - he even gave away free beer on tap! Its interesting how this came about, Gordon's son was listening in to my Blues radio show and heard me mention we needed a venue, he told his father and Gordon called me. Now that's cool! (Hmmm, maybe I should mention on air that I need a larger house and a pay rise)

I drew up a poster and emailed it to friends who in turn forwarded it on. I asked those mentioned above, who form the 'River Rockers Blues Band', to come sit in and be the back line (drums, bass and guitar). I also asked a trio, John-guitar+v, Simon-double bass and Eric-drums, who form the band 'Johnny Stash', a rockabilly, blues/rock/ska/swing band to come sit in too. We kicked things off at about 8.30pm. I was late and found the RiverRockers had set up all the PA gear - opps, won't do that again.

As the night progressed we must have seen about 80 or so people turn up and stay till around 10.30 by which time people starting leaving. Performers included a guy on trombone, a male vocalist, a young drummer of only 17yrs, and yours truly on harp sitting in with the RiverRockers and Johnny Stash. The last song was performed at about 11pm with two guys still drinking who sang and played harmonica - "Shake Your Money Maker." Not bad for two weeks prep and emailing.

My observations about the Jam:
a) Atmosphere. It was pretty relaxed, which was a good thing, especially for the first jam. When more people show who want to perform then time frames may have to be regulated more.

b) Sound levels. This needs to be regulated so the softer performers get heard and the louder ones don't bring the second story down on top of us.

c) Ending long jams. I don't have all the answers but if you know how to end a long jam it would be good to know. You know how some jam songs can go on and on.

d) Jam Rules. I made up a list that had way too many rules. Should these be read out publicly or just left for people to read either on a paper or up on the wall? Basic rules I'd like for next time are: Blues Music; 3 songs or no longer than 20 minutes; Sound levels may be regulated; Jam as a band or join the house band.

e) The MC. Having an MC is good. Being the MC was hard case. I need to remember performers' names in future. The MC can inform the audience where things are heading, a valuable part of the jam that wasn't there so much in pervious years. The MC role can be shared around.

f) Music playing between sets. This was great, a little CD played hooked into the PA and CDs playing during sets, kept the crowd happy.

(If you were there and have any feedback for me as the MC or about any part of the jam then please forward it to me. The learning curve I'm on great! These are my opinions/observations - you don't have to agree with them.)
Posted by Nate Ness Monster at 10:08 am No comments: 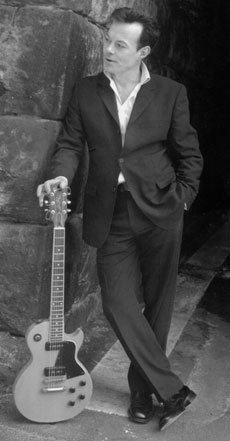 Eric Lindell - Change in the Weather

Posted by Nate Ness Monster at 8:55 am No comments:

Sharing harmonicas!!! I've always been told this is a No No.
I don't share my own harps, even with better players than me,
but then I'm not Jerry Portnoy or Junior Wells am I.

I could be misreading what I've just watched on this YouTube clip
but I swear Jerry is setting up a harmonica and mic for Junior Wells. Could it be one of Jerry's harps or maybe a brand spanking new harp! (yeah right!)

The scene is right at the end (sorry, don't know how to make clips
shorter).

Try watching at about 6.06 (time wise), you'll see Junior
reintroducing Muddy Waters, asking him to return to the stage BUT take
special note of Jerry in the background, I'm sure he flicks a harp
from his back pocket, sets it up on the mic and right at the end of
the clip hands it out for Junior to take. I don't know if I'm seeing
this right but my question is: If Junior took the harp and mic from
Jerry did Junior know where the harp had just come from?

Posted by Nate Ness Monster at 3:45 pm No comments:

The Blues Room Presents the Rhythm and Blues Jam 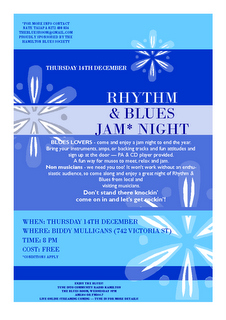 Posted by Nate Ness Monster at 6:30 pm No comments: