The Venue For the Blues and Roots Fest

See the full line up here
http://www.bluesfest.com.au/
Posted by Nate Ness Monster at 11:42 pm No comments:

Posted by Nate Ness Monster at 4:13 pm No comments:

Randy Chortkoff
Delta Groove Music/Productions is a labor of love and culmination of a lifelong obsession with blues and roots music on the part of celebrated producer and successful entrepreneur Randy Chortkoff. Each Delta Groove project is undertaken with the guiding principle that quality speaks for itself, so the utmost care is given to every detail, from A&R to production to packaging to promotion - but first and foremost, the performances. Delta Groove is all about the music. Without great performers and great performances, nothing else matters.

The newest member of the Delta Groove family is, Jason Ricci & New Blood. Jason is an extraordinary artist whose skills on his instrument of choice, the harmonica, continue to reach new levels. At the age of 21, Jason placed first in the Sonny Boy Blues Society contest in Helena, AK and shortly thereafter began working and paying his dues with the likes of Junior Kimbrough and R.L. Burnside. Over the years Jason has crossed paths and worked with other up & coming talent including Enrico Crivellaro and Nick Curran, in addition to winning numerous awards including the "Muddy Waters Award" for most promising talent, and signing on as an endorsee with Hohner Harmonicas. His upcoming release for Delta Groove will be produced by the Grammy Award winning producer John Porter. With a touring schedule of over 300 days a year, you can be sure it won't be long before you can catch this rising star performing in your own home town. www.jasonricci.com
Get a taste of the great artists signed to Delta Groove by viewing these video clips.

Posted by Nate Ness Monster at 10:54 am No comments:

A label that is just a little bit different from the rest !!

For Jan Mittendorp and the crew at 'Black and Tan' blues is a part of the rich folk-music tradition. Story telling music that was created by artists who wrote and sang their own songs. To paraphrase Big Bill Broonzy when he was asked if he sang folk music, " Well I guess you'd have to call it folk music, 'cause I never heard a horse sing."

At 'Black and Tan' you will find artists that can really sing, write good songs and have a story to tell. The instruments support the lead voice but the voice and the story are predominant because to us, they are the roots of this vital music. So don't expect merely 'guitar heroes' or 'harmonica wizards' on 'Black and Tan'.

It is the goal of 'Black and Tan' to get this great and handmade music to music fans all over the world.

As a small independent label the Internet is a very useful addition to their distribution network. So be aware that all the music of 'Black and Tan' is also available at stores like Amazon

Posted by Nate Ness Monster at 3:48 pm No comments:

Posted by Nate Ness Monster at 3:27 pm No comments:

Strange, I've seen that face before ... 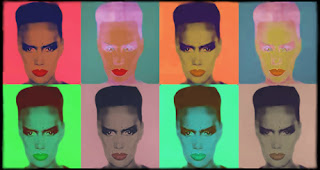 Posted by Nate Ness Monster at 3:16 pm No comments:

Who would have guessed that the keyboardist for one of the hottest Rhythm and Blues Women's Bands would be someone who has lived in New Zealand?

Susie Woodman has been the keyboardist for both Meatloaf and Grammy Award winner Richard Wagner of Alice Cooper and Lou Reed fame and Road Manager for Question Mark and the Mysterians. She plays keys for the fabulous band Detroit Women.

The ladies are all soloists in their own right, range in age from young to “it’s not polite to ask” and come from a wide variety of backgrounds that cover a gamut of blues and R&B styles including swing, Chicago shuffle and Texas romp. Scanning the long list of luminaries that they have performed with reveals notable names like Ike and Tina Turner, The Rolling Stones, Elton John, Joe Cocker, Hall and Oats and Etta James.

I received a copy of their latest release 'Sassitude' and played the first track, 'Down in the Basement' while my children were brushing their teeth this morning. Man you should have seen them shake their bootie! They were having the time of their lives, even our two year old was shaking her stuff. You won't be able to hold back too once you spin this Cd, it features a range of solid blues, RnB and soulful stylings of some wonderfully written songs. A CD I'll be spinning on my blues radio programme for sure!
Link to Detroit Women at myspace.com
Posted by Nate Ness Monster at 10:05 am No comments: