"Tin-eared critics have frequently damned him as a yuppie blues wannabe whose slickly soulful offerings bear scant resemblance to the real down-home item. In reality, Robert Cray is one of a precious few young blues-based artists with the talent and vision to successfully usher the idiom into the 21st century without resorting either to slavish imitation or simply playing rock while passing it off as blues. Just as importantly, his immensely popular records helped immeasurably to jump-start the contemporary blues boom that still holds sway to this day. Blessed with a soulful voice that sometimes recalls '60s-great O.V. Wright and a concise lead guitar approach that never wastes notes, Cray's rise to international fame was indeed a heartwarming one. For a guy whose 1980 debut album for Tomato, Who's Been Talkin', proved an instantaneous cutout, his ascendancy was amazingly swift -- in 1986 his breakthrough Strong Persuader album for Mercury (containing "Smoking Gun") won him a Grammy and shot his asking price for a night's work skyward.
"Robert Cray was born on August 1, 1953 in Columbus, Georgia. An Army brat who grew up all over the country before his folks settled in Tacoma, Washington, in 1968, Cray listened intently to soul and rock before becoming immersed in the blues (in particular, the icy Telecaster of Albert Collins, who played at Cray's high-school graduation). Cray formed his first band with longtime bassist Richard Cousins in 1974. They soon hooked up with Collins as his backup unit before breaking out on their own. The cinematic set caught a brief glimpse of Cray (even if they weren't aware of it) when he anonymously played the bassist of the frat party band Otis Day & the Knights in National Lampoon's Animal House. Cray's Tomato set, also featuring the harp of Curtis Salgado, was an excellent beginning, but it was the guitarist's 1983 set for HighTone, Bad Influence, that really showed just how full of talent Cray was. Another HighTone set, False Accusations, preceded the emergence of the Grammy-winning 1985 guitar summit meeting album Showdown! for Alligator, which found the relative newcomer more than holding his own alongside Collins and Texan Johnny Copeland. Strong Persuader made it two Grammys in two years and made Cray a familiar face even on video-driven MTV.
"Unlike too many of his peers, Cray continued to experiment within his two presiding genres, blues and soul, on sets for Mercury such as Midnight Stroll in 1990, I Was Warned in 1992, and Shame + A Sin in 1993. After switching to Rykodisc in the late '90s, Cray released Take Your Shoes Off in 1999 and Shoulda Been Home in 2001, proving that the "bluenatics" (as he amusedly labels his purist detractors) have nothing to fear and plenty to anticipate from this innovative, laudably accessible guitarist. Touring regularly with the likes of Eric Clapton and Bob Dylan, Cray stayed active in the studio as well, signing with Sanctuary Records and releasing Time Will Tell in 2003, Twenty in 2005, a pair of live albums, Live from Across the Pond in 2006 and Live at the BBC in 2008, and This Time, which was issued by Vanguard Records a year later. Cray released his third live album in four years, Cookin' in Mobile, in 2010. The material that comprised the album was taken from a single performance at the Saenger Theatre in Mobile, Alabama in February of that year. The Kevin Shirley-produced Nothin But Love, a solid outing featuring narrative songs that circle around the trials and tribulations of love, appeared in 2012. (taken from http://www.allmusic.com/artist/robert-cray-mn0000830425)
Episode 348, 19 September 2012
1. BB King with Robert Cray - Playing With My Friends
2. BB King with Eric Clapton - The Thrill Is Gone
3. Jimmy Vaughan, Robert Cray, BB King, Buddy Guy, Dr. John - Tick Tock
4. Robert Cray Band - Too Many Cooks
5. Robert Cray Band - Right Next Door (Because Of Me)
6. Robert Cray Band - When The Welfare Turns Its Back On You
7. Robert Cray Band - Won't Be Coming Home
8. Robert Cray Band - You Belong To Me
9. Robert Cray Band - Blues Get Off My Shoulder
10. Otis Rush - Its My Own Fault Baby
Download this episode

Posted by Nate Ness Monster at 12:27 am No comments:

Clayton Doley is Australia's finest Hammond organist and is quickly gaining international recognition as one of the top new players on the world stage. His fierily bluesy virtuosity has earned him spots on on some of the worlds biggest festivals including Montreal International Jazz Festival, Byron Bay Blues Festival, Toronto Jazz Festival and Tremblant International Blues Festival to name a few. I give you a taste of what you can expect on Clayton's new album, 'Desparate Times,' on this episode. Enjoy!

The Blues Room 346, 5 Sept 2012
I can't remember how I discovered the heritage Blues orchestra but I'm so glad I did. This band is authentic sounding and has so many accomplished musicians in it that its well worth your interest. I start this episode with a new track sent to me featuring the late Willie 'Big Eyes' Smith (an ex-Muddy Waters Band drummer) with Roger 'Hurricane' Wilson. As it turns out, Willie's son, Kenny 'Beedy Eyes' smith is the drummer for Heritage Blues Orchestra!
Download this episode: 346
Click here for more info about Heritage Blues Orchestra and to get free download: http://www.heritagebluesorchestra.com/home.cfm
1. Willie 'Big Eyes' Smith - and Roger 'Hurricane' Wilson - Born In Arkansas
2. Paul Rishell - Big Road Blues
3. Robert Lockwood Jr and Carey Bell - I'm A Steady Rollin' Man
4. Heritage Blues Orchestra (HBO) - Clarkesdale Moan
5. HBO - C-Line Woman
6. HBO - Big Legged Woman
7. HBO - Catfish Blues
8. HBO - Go Down Hannah
9. HBO - Get Right Church
10. HBO - Hard Times
Posted by Nate Ness Monster at 11:27 am No comments: 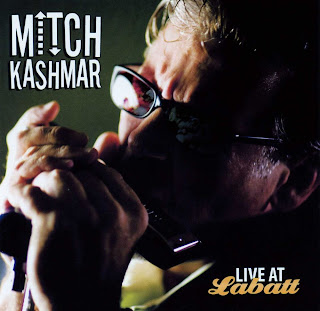 The Blues Room 345, 29 Aug 2012
I put together tracks from Mitch Kashmar's live performance at Labatt for this episode. Mitch is one of my favorite harmonica players. Mitch and Kim Wilson along with Rick Estrin are in my opinion the best at top end playing. Enjoy!
Download this episode: 345 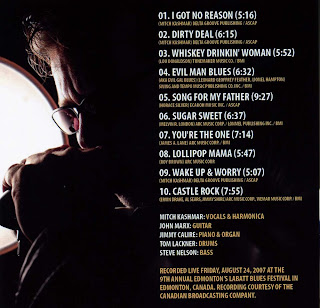 DESCRIPTION
“…Californian Kashmar bursts out…drawing intensity out of original material about women and drink as skillfully as anyone emoting through Marine Bands today.” – Downbeat

“Kashmar is a mighty, tuneful vocalist who also plays trainloads of wicked harp.”– Hittin’ The Note

On Friday, August 24, 2007, Mitch Kashmar was invited to perform at the 9th Annual Edmonton’s Labatt Blues Festival in Western Canada, and fortunately for blues fans everywhere, the event was captured for posterity in front of an enthusiastic crowd by the Canadian Broadcasting Corporation. Joining Kashmar on his performances for this release are Pontiax drummer Tom Lackner, bassist Steve Nelson, pianist Jimmy Calire, and former William Clarke guitarist John Marx providing the perfect foil to Kashmar’s dynamic harp playing and emotive vocals. The live concert format allows Kashmar to really stretch out instrumentally and strut his stuff as he runs down a program featuring fan favorites off his two critically acclaimed Delta Groove releases and additional material including “Lollipop Mama,” a tribute to his old friend the late great William Clarke. “It’s the best stuff I’ve ever done!” says Kashmar, and we think you’ll whole-heartedly agree!